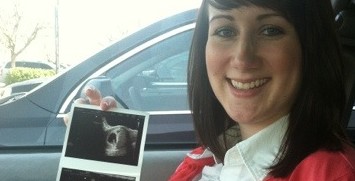 October is a big month for us. It has been every year since we were married. We celebrate our anniversary in October, my niece was born in October, and now we are expecting our first baby this coming October. We are beyond excited.

This past year has definitely been a trying one. Several months back, I was in a bad car accident where our minivan was completely flipped upside down onto another car. Hanging upside down, I was able to release my seat belt and crawl out of the broken window. Completely crushed on one side, the van was totalled. Feeling so alone and scared in the ambulance, I wasn’t sure what to expect when I got to the hospital. I was ok. Nothing was broken. I was alive. Yet, the one thing I could not stop thinking about was, “What if I’m pregnant?” We had been trying. I knew I was alive, but I didn’t know if I had any injuries to my neck, back, etc. They, of course would have to take xrays. I expressed to the doctors that I might be pregnant and knew that the extensive xrays they needed would not be good for the pregnancy. I was scared; frustrated. I wasn’t allowed to walk until they had completed the xrays and they informed me it was too early for them to test for pregnancy. I had no choice but to get the xrays done. At this point, everything was out of my hands. What I didn’t realize at the time was that the entire situation from start to finish had been out of my hands. God was sovereign. The nurses did their best to thoroughly shield me when they took the xrays. They tried to comfort me and tell me it would be ok. Though there may have been no real danger at the time even if I had been pregnant, I was so overwhelmed with what had just happened to me that the unknown scared me. There were no serious neck or back injuries, though I continue to go through chiropractic care and therapy for the trauma to my back. When the time came for me to find out if I was pregnant that month, I couldn’t help but be thankful it was negative.

We had been trying for about 6 months now. I hadn’t really felt concerned that anything was wrong at this point, though it was disappointing from month to month. I questioned why it just wouldn’t happen when we wanted it to. But, I had hope for next month.

Around the same time as my accident we had been asked to consider moving to Baltimore, MD for Ricky to take a position at Arlington Baptist Church. Again, these questions flooded my mind: “What if I get pregnant and we’re trying to move?” “Should we stop trying?” “If I do get pregnant will I be able to find a doctor in time?” “How will everything work out with us moving?”  Maybe I’m the only one that analyzes everything as much as I do, but  I was making myself go crazy. I felt  this was something I wanted so badly, yet God kept bringing  things into our lives that put everything on hold. All the while, every month was going by with a negative pregnancy result. Shouldn’t I have been glad I didn’t become pregnant when all this was going on? Yet, the fact that something might be wrong started to consume my mind. I tried to trust in God’s timing, and I thought maybe once we got to Maryland it would happen. But it didn’t. Not for awhile, at least.

It had now been just over a year that we had been trying. I kept hearing “When you stop thinking about it, it will happen.” But what woman can really stop thinking about something she desires so strongly? I couldn’t. It turned from discouragement, to fear, to intense anxiety. It was an emotional roller coaster. I obsessed over every sign that I might be pregnant. I almost convinced myself that I was pregnant at times. It was wrong, and I needed to stop and think about what was going on. As much as I wanted this, I just kept believing it would happen the next month. The waiting was hard, but then I would get over the pain after a  day of real discouragement. I treasured the extra time that Ricky and I would have together, just us. I really wanted to focus on exercising and getting in shape. But, I still really wanted to get pregnant. And I knew Ricky did too. Though, he was so encouraging when disappointment came, I could tell he was looking forward to when I would tell him, yes, I am pregnant. We prayed, we talked, we discussed seeking medical testing. I decided I needed to stop focusing on my disappointment and simply trust that God is sovereign, and He knows exactly what He is doing. I stopped googling every sympton I thought was a sign. I started jogging and eating right. (It was torture) We continued to pray.  And we just kept trying. But we thought differently about it. A couple more months went by. We decided to try one more month, and then seek advice from doctors to see if anything might be wrong. However, we never had to set up that appointment to meet with the doctors.  By God’s amazing grace this would be the month for Him to bless! I will never forget that special moment Ricky and I shared as I went to him, red faced, shaking, and eyes full of tears. He thought something was drastically wrong with me just by looking at me. But, I grabbed him and told him we were pregnant!!!!! It had finally happened! Of course I had to make sure he confirmed that I was seeing clearly by having him look at the pregnancy test. Sure enough! The rest of the day we could think of nothing other than this happy news. We praised and thanked our Lord. Looking back over this year, I feel overwhelmed and blessed. My pregnancy has gone very well so far! I have only “suffered” from minimal nausea by throwing up a handful of times. I have to use the bathroom a lot more. I am a little more picky about my food and cannot seem to eat as much in one sitting. (which is odd for me)  I have heartburn more often, and I occasionally crave unhealthy foods.  I have tried to keep my energy up by exercising regularly and eating nutritious foods. I am very thankful I have felt so good!

We are looking forward to finding out if it’s a boy or  girl in the next few weeks. We feel so blessed and pray for humility and godliness as soon to be parents. This is joy under the sun.